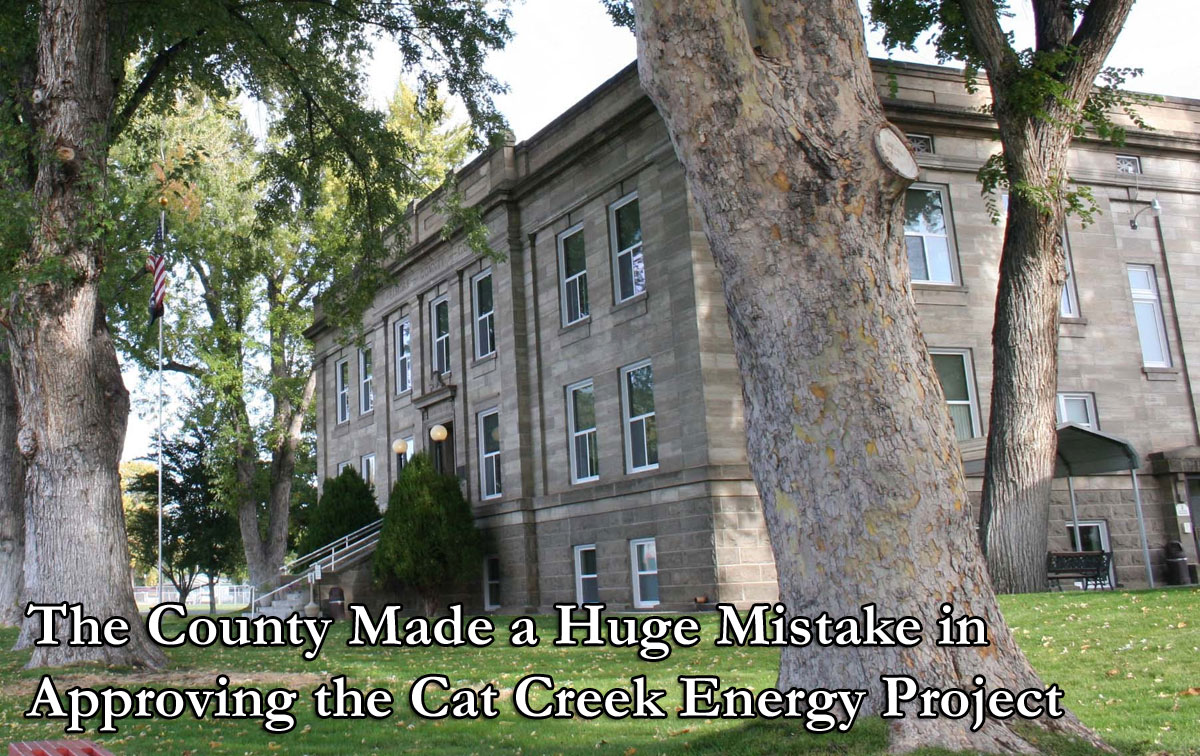 On March 7, 2019, the owner of the S Bar Ranch filed a petition with the Fourth District Court asking a judge to review the decisions that Commissioner’s Bud Corbus, Al Hofer and Wes Wootan made regarding the nearly 4,000 acre Cat Creek Energy mega-project. The 64-page petition can be downloaded at https://catcreek-energy.com/download/928/ but we realize some resident don’t have the time to review such an extensive legal document, no matter how well it was written (it’s mostly plain language and tells a troubling story).

Just Some “Bit and Pieces” of the Document

Below you’ll find some actual snippets from the legal document to whet your appetite and give you a reason to spend a few hours reading about how entrenched the “good 0ld boy” network has become in our local government. So, here goes.

Page 30 / Conflicts of Interest
The Board of Commissioners have a conflict of interest that violates I.C. § 67-6506 and other law, and prevents them from serving as a neutral quasi-judicial body in this contested matter that is pending before the Board. The conflict arises from the fact that the County is
requiring, as a condition for issuance of CUP-2015-04 and the other CUPs, that the Developer agree to divert and deliver water from Anderson Ranch Dam to the County using the Developer’s infrastructure. In other words, the County has a vested beneficial interest in approving the granting of hydro CUP and the other CUPs, which prevents the Board from serving as a neutral decision maker as required by law.

Page 52 / The Board’s Decisions Violate Due Process Because Two of Its Members Had Ex Parte Communications with Cat Creek
During the December 22, 2017, public hearing, CommissionerWootan acknowledged the Commissioners had been communicating among themselves regarding the project and decided they wanted to make the project work. In response to comments from a representative of Cat
Creek that they would work with the Board to put a deal together that works for Cat Creek and the County, CommissionerWootan stated: “We’re already to that point. We’ve already communicated among ourselves that we’re workable, that we want to make their project work,
and we want to make our intent happen.” Obviously, the Board had decided to approve the project, regardless of the public’s input in the decision, in violation of due process.

The next court hearing will be on May 16, 2019, at 3 p.m. in Boise, Idaho before Judge Nancy Baskin.  That is when S Bar Ranch will present oral arguments in support of our case and ask the judge to rule that the actions of the County are invalid and to remand it back to the Director of the Elmore County P&Z Commission.

We believe Judge Baskin will take the decision under advisement and render a written decision as early as July 2019.

Take Action Before it is too Late

There are many actions you can take that will send a clear message to the Elmore County Commissioners, the State of Idaho and even our federal government.

Contact the Elmore County Commissioners and tell them you are opposed to the Cat Creek Energy project.

Contact your State Representative and State Senator and tell them to find a way to stop the Cat Creek Energy project before it ruins our Idaho backcounty, hunting grounds and fisheries.

We’ve put together a list of contact information for all the elected official mentioned above at https://catcreek-energy.com/mailing-addresses-for-cat-creek-energy-issues/

There are many people in and around Elmore County that still do not know about the Cat Creek Energy project and how badly it will affect wildlife, fishing, water quality and hunting. Please share this information with your friends, family, and co-workers.